GRADE is an acronym for Grading of Recommendations Assessment, Development and Evaluation.

GRADE provides a systematic process for the development of CPGs. (1) The GRADE approach is a system for making judgments about the quality of evidence of research studies and strength of recommendations. GRADE was designed by an international team of researchers who were motivated to create a system that would improve upon, and ultimately replace, the many existing systems of evidence assessment and recommendation grading that guideline developers were then using.

The AOM began using the GRADE methodology for guideline development in 2011. Prior to adopting the GRADE approach, AOM CPGs used the levels of evidence and grades of recommendations previously used by the Canadian Task Force on Preventive Health Care (CTFPHC). (2) The CTFPHC began using GRADE in 2010. A number of other organizations that evaluate research evidence and/or develop guidelines also use GRADE, including the World Health Organization, the National Institute for Health and Clinical Excellence (NICE), and the Cochrane Collaboration.

GRADE has a number of key benefits over the CTFPHC approach to rating levels of evidence and strength of recommendations: 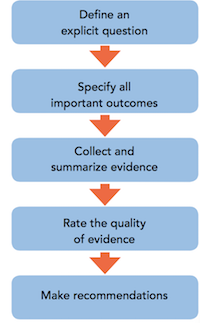 AOM CPGs use the GRADE methodology for guideline development, and also rely on the AOM’s Value-based Statement on Guideline Development to guide the work of AOM staff and CPG Work Groups. (3)

Recommendations in AOM CPGs are graded as either strong or weak according to the GRADE system.

The strength of recommendation reflects the extent to which the CPG Work Group is confident that the benefits of a recommended intervention outweigh its harms, or vice versa. The strength of recommendation is influenced by the quality of supporting evidence, the balance between desirable and undesirable effects, and the perceived variability or uncertainty in clients’ values and preferences with respect to the intervention.

The CPG Work Group’s judgements about the quality of evidence reflect its confidence that available evidence correctly reflects the real world effects of the intervention for midwifery clients and is sufficient to support informed choice. 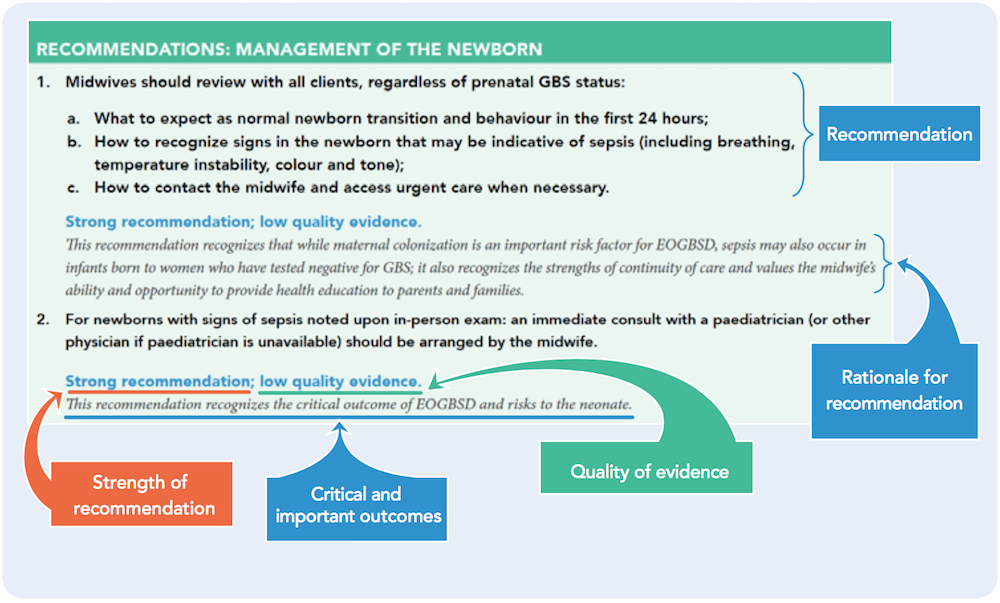 More about strength of recommendation and quality of evidence

(3) Association of Ontario Midwives. Collated Response: A Values Based Approach to CPG Development. 2006.